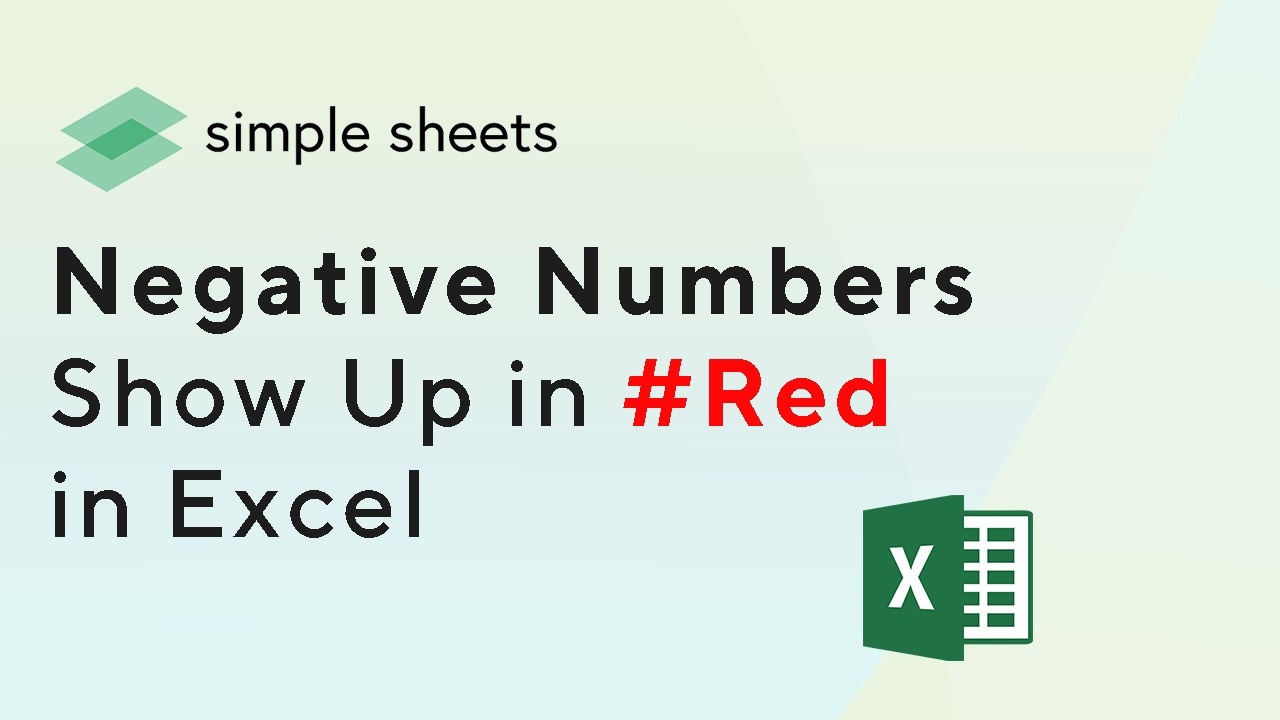 How to Make Negative Numbers Show Up in #Red in Excel

Microsoft Excel (for the most part) saves us a lot of time and trouble as it offers innovative and more accurate solutions when it comes to tables and calculations. These features make your work in Excel much more productive.

Suppose you work as an accountant for a company, or in case you have your own small business that uses Excel, a bunch of numbers placed next to each other is a little difficult to navigate. More so if you need to search specific values. Over time, you may realize that it is challenging to search multiple negative numbers in an Excel worksheet just by browsing the Excel worksheet category list.

This causes a lot of problems related to the accuracy of the calculations, as well as wasting time, is pretty distracting, and sometimes gives you overlapping numbers.

We'll show you later in this post how you can add the negative sign in the cell next to the negative value to be more precise and evident once you see it on the worksheet. Review the guidelines for customizing a number format number.

With this method, negative numbers will be highlighted in the current worksheet.

Just follow the next few steps, and you'll find that this is the shortest way to reach your goal of making negative numbers look red in parentheses with the negative sign.

So, let's show you how to Make Negative Numbers Red in Excel:

How Do I Make Negative Numbers Appear in Parentheses

Now, we will show you how to make negative numbers bracketed in the Excel worksheet by custom number formats so that your work becomes more professional using minimal efforts.

You can also use the attached MS Excel file, which the steps have been applied to. For more practice just open excel file attached then you can create your own file. Download the Tutorial Spreadsheet of How to Make Negative Values Show Up in #Red in Excel.

This example shows a file containing the profits and losses of selling some products over several months.

The negative numbers are losses, and the positive numbers are profits. You will also find a cell number format containing the number (0) that indicates the products that have not been sold over the months at all.

We will also explain how to show the sign (-) instead of the number (0) in the format cells. You can also See the Format Cells.

Look at how to do it in the following steps found in the screenshots below:

In the beginning, Select all the cells in the workbook by highlighting them by clicking on the arrow on the top left side of the file. You will find it indicated by the red arrow in the screenshot below.

Click the right button of the mouse. A dialog box will appear; select the Format Cells dialog box option. As shown below.

It will open a new window. Select Custom Format option.

You will see the word "General" in the place indicated by the red arrow, as shown in the screenshot below.

Copy the word "General" and paste it two more times to make it three words in the format, separated by a decimal point without any space. Or, just create/write this excel formula: General;General;General

Or, You can find the exact format as the last option of the drop-down list.

The first "General" represents the format of the numbers if they are positive numbers.

The second "General" represents the format of the numbers if they are negative numbers.

The third "General" represents the format of the numbers if the number they are Zeros (0).

Now, choose the "Custom Format" then put the second "General" for the number format of all the negative numbers bracketed. Or, write the formula like this: General;(General);General

You should add the brackets between the two decimal points on the left and the right.

Finally, save the formatting by pressing the OK button.

Now, this displays negative numbers format as shown below.

How Do I Make Negative Numbers In Red Color

Now in this post also, by this new rule, you can change the font color of the minus numbers formatted to red. Make all the negative numbers dark red text. Just, apply the following instructions formatting, to display negative numbers in red and keep the positive numbers as they are in the default color.

Select all the cells in the workbook by highlighting them by clicking on the arrow on the top left side of the file. You will find it indicated by the red arrow in the screenshot below.

Click the right button of the mouse. A dialog box will appear; select the Format Cells dialog box option. As shown below.

Choose the "Custom Format" then you can add "red" entry between these brackets "[]".

Or, just copy the following formula and paste it there: General;[red](General);General

Finally, save the formatting by pressing the OK button.

Now, you can find the format cells of the whole numbers - the negative numbers- red. That will show a significant difference in your work excel spreadsheet format number.

You can change the cell formatting to add the minus sign to the negative values cells. This formatting will not affect positive numbers.

Select all the cells in the workbook by highlighting them by clicking on the arrow on the top left side of the file.

Click the right button of the mouse. Select the Format Cells dialog box option to custom formats. As shown below.

Choose the "Custom Format," then you can add the minus sign (-) beside the second "General" to create the formula making a negative number format in the excel sheet.

Or, just copy the following formatting and paste it there: General;[red](-General);General

Here, see the next screenshot of how the values formats will be.

Highlight cells by clicking on the arrow on the top left side of the file.

Click the right button of the mouse. Select the Format Cells option.

In the number tab, replace the third "general" with the sign (-)

Or, copy the following formula General;[red](-General);-

The Zero-value still appears in the original bar up the screen; it will only be changed in the cells. As shown below.

The above method allows you to have a great understanding how to manually create conditional formatting in your spreadsheets. If you want to achieve similar results in under two minutes, you can use the Conditional Formatting tool readily available in Excel.

Head over your Ribbon, in the Home Tab. In the Styles Group, click on Conditional Formatting.

In the drop down list, we can select Highlight Cells Rule > Less than, and enter 0 (since all values less than 0 are negative)

And there you have it! Easy peazy!

As we mentioned before in this post, excel makes your work life easier. You have to practice this feature while working on Excel. See the previous post 10 Reasons why Microsoft Excel is Fun.