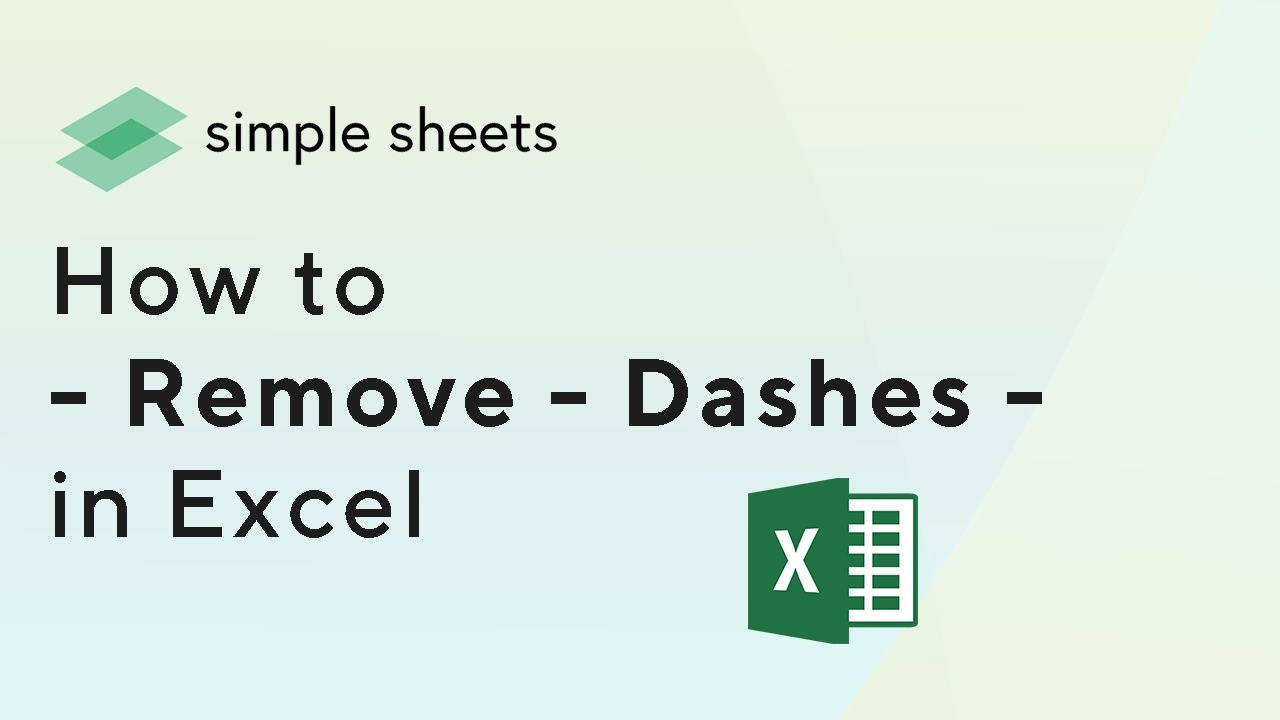 How to Remove Dashes in Excel

If you are a Microsoft Excel user, you will use probably use it to facilitate business with some of its magical features. See Excel is Fun.

Excel offers many essential tools, including removing borders between cells, columns, and rows and removing dashes between numbers and words.

Sometimes you need this feature badly when you have a lot of text data, numbers, or maybe SSN data that may contain dashes and you need to remove dash in excel for example.

Unfortunately, it would take loads of painstaking hours to remove dashes in Excel.

But by using the steps shown in the example below, you will get the desired result in just a few seconds and you can easily remove the cell borders as well as all the dashes.

This will make you so productive and get your work done very quickly. So in this article; let's learn how to remove borders and how to remove the dash in excel by using a formula or replacing feature:

How to Remove the Borders Between Cells

As shown in the below, you can remove borders between cells, rows, and columns through several simple steps.

First, you can download the file How to Remove Dashes in Excel Sample Sheet and practice on it for maximum benefit.

Highlight some cells as shown in the screenshot below.

A dialog box will appear. Choose Border as you see here.

Below the border icon, you'll find some options. Select None.

Now, this excel process example shows you a writing space as a text box without any borders. See the screenshot below.

How to Remove Dashes (-) in Excel

Let's learn how to remove the dash symbol (-) from text or numbers in multiple cells.

For example, if you have social security numbers (SSN data) or phone numbers and multiple lines that contain dashes, you want to remove them without wasting a whole day.

Bonus Tip: You also can apply this to remove characters.

If you try removing the dashes in Excel manually, you will find an unexpected disaster. As soon as you remove the hyphens, the leading zeros disappear because Excel guessed that you were trying for example to enter the number 7897897890 in the cell instead of the code 07897897890.

So, if Excel ignores leading zeros in the cell, YOU shouldn't.

In this example; we have a phone number containing dashes (-) needed to be removed. To apply this feature there is more than one method for removing dashes or hyphens.

First method: How to Remove Dash or Remove Hyphens in Excel by the Replace Feature.

You will find in the Home tab, in the Clipboard at the top of the excel sheet, the "Find and Select" icon as shown below.

Press the "Find and Select" icon, and select replace.

This will open the Find and Replace dialog box. In the ‘Find what’ field, type the dash symbol (-) or hyphens.

You can remove unwanted hyphens using the Keyboard Shortcuts. Hold the Control key and then press the H key. Use the replace feature.

This will open the Find and Replace box. In the ‘Find what’ field, type the dashes (-) or hyphens. Then, in the replace with; you should keep the field blank. Click on Replace or Replace All.

You will get the original data without the dashes or hyphens y using the replace feature. See the screenshot below.

You can also remove the dashes by using the excel Substitute function or the excel formula.

Just apply the few steps given below. And add the following code or the excel formula.

You will get the old text or the data without the dashes, and the result will be the same as the result you got by applying the previous method.

Add the following substitute formula to one of the cells or the next column in the Excel worksheet. See Excel Formula.

That will transform or substitute the data or the values from one column to another and remove dashes and replace them with a null string.

You will keep the original data format in the cell even after using the excel substitute function.

You will notice that the above formula appears in the excel text string as shown in the red box in the screenshot.

(A1) represents the cell from which you want to remove dashes.

(“-”) represents the string you want to remove.

You need to place it in double-quotes.

(“”) represents the format you want to replace it with. That will substitute dashes with a blank or a null string.

You can use the replace method or the Excel formula methods to apply that feature.

In case you may need the original data later, make sure you create a backup copy before doing this.

You can also use the ready-to-use templates from Simple Sheets.

The templates are definitely going to save you time and resources. See the benefits of the templates.

You may also see other tutorials from Simple Sheets to make your excel spreadsheets could look like them:

How to Make Negative Numbers Show Up in #Red in Excel

HOW TO CORRECT THE #SPILL ERROR IN EXCEL

How to Remove Duplicates in Excel

Stay connected with news and updates!

Join our mailing list to receive the latest news and updates from our team.Don't worry, your information will not be shared.

Want to Bring Your Spreadsheets to Life?